The euro and dollar reached parity on 13 July for the first time in two decades providing US buyers with a significant discount when purchasing in any of the Eurozone’s 19 countries.

UK homes offer a similar currency advantage for US buyers. Dropping to 1.18 this week the GBP/USD exchange rate is at its lowest rate since the start of the pandemic.

This is a boon not just for US buyers looking to buy in key markets overseas but for those global buyers whose currency is pegged to the dollar, such as the dirham in the UAE, the Hong Kong dollar and several emerging markets across Central America and the Middle East.

The war in Ukraine, inflationary pressures as well as the more aggressive stance taken by the Federal Reserve and Bank of England compared to the European Central Bank (ECB) explains what’s behind the currency shift.

The ECB is expected to raise interest rates today, its first such move in 11 years. A Reuters poll expects a 25bps rise but this will still leave the Eurozone’s base rate in negative territory at -0.25%, although a minority are pricing in a 50bps move.

For US buyers looking to purchase a home in the Eurozone it means a discount of 16% compared to a year earlier (as at 19 July) based on currency alone. This discount may be eroded slightly in those markets that have recorded significant price growth over the last 12 months.

For US buyers looking to purchase a home in prime central London, the combined impact of currency shifts and price performance means a 10% discount compared to a year ago. 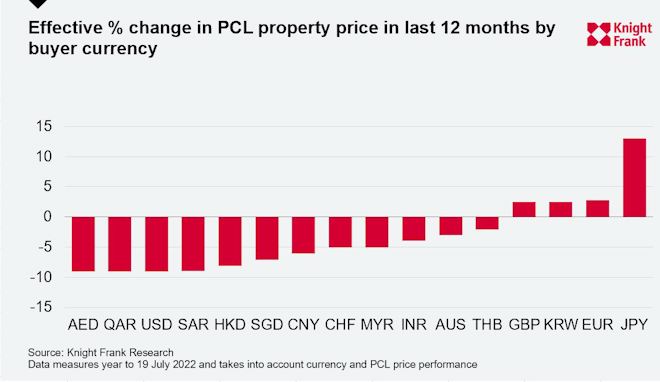 The slowdown may be shorter and sharper than economists predicted just a few months ago.

We’re seeing sharper initial falls in key indicators. New Zealand, where interest rates have been hiked six times in the last eight months arguably acts as something of a lead indicator for advanced economies.

Here, prices have fallen 8% from their high in November 2021 and residential sales have slipped 38% in the year to June 2022.

But analysis by Capital Economics suggests house price falls are often the final stage in a chain of events.

The four key phases of a housing market slowdown:

In the US during its slowdown in the early 2000s prices continued rising seven months after sales peaked according to Capital Economics.

In 2022, we’re seeing markets react quicker but in a more nuanced way due to the atypical set of circumstances brought about by the pandemic. Construction rates remain low in most markets, not due to a lack of buyer appetite but a shortage of labour or materials.

On the flip side, with robust labour markets and tight mortgage lending in place  – including a large proportion of households now on fixed rates – it is likely price falls, if any, may be modest.  The downside risk is if Central Banks adopt a more aggressive stance than currently anticipated.

One thing is certain global housing markets won’t follow a linear course. Singapore is one such outlier. Here, sales increased in the first quarter of 2022 despite a stamp duty hike last December.

The staggered reopening of borders, variable supply chain shocks, differing inflationary pressures and the speed and scale of the resulting rate hikes will all have a bearing.

The Communist Party’s drive to rein in over-leveraged Chinese developers in recent months has led to developers going bust before completing new projects. Homeowners are now defaulting on mortgage payments accusing developers of failing to deliver the apartments they’ve paid for.

This week 301 projects in 92 cities saw buyers default on their mortgage payments.

Why does this matter? Estimates suggest 70% of wealth in the Chinese mainland is tied up in property and the sector accounts for a fifth of China’s GDP. The latest estimates suggest the value of mortgages that could be affected is around 2 trillion yuan ($297 billion).

Aggrieved homeowners may not have to wait long though.

With pressures mounting ahead of the Communist Party’s once-in-five-years meeting this Autumn, there are suggestions the government may take steps to stabilise the market sooner rather than later.

It’s likely homeowners will be allowed to temporarily halt mortgage payments on stalled projects without incurring penalties. Meanwhile, local governments and banks will be urged to plug funding shortages for developers.